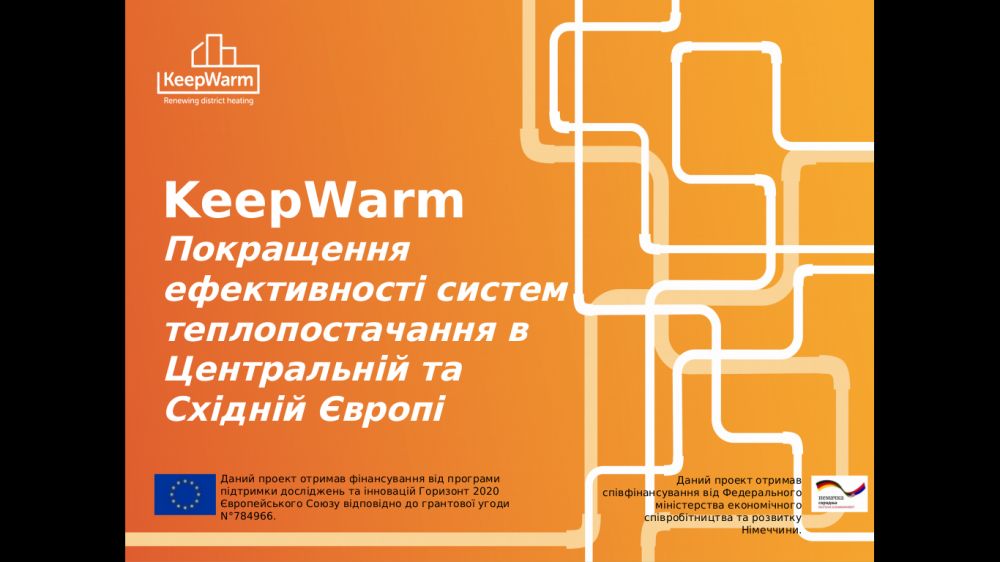 The KeepWarm project Inspire Event series in Ukraine started on 9 July 2020. The first webinar was devoted to the presentation of district heating modernisation projects being developed by KeepWarm partners in four Ukrainian cities. It was organised by KeepWarm project partner KT-Energy LLC and attended by 18 participants.

Kyryl Tomliak, Director of KT-Energy LLC welcomed the participants and introduced the KeepWarm project and the series of webinars to be held during the month of July 2020.

“The KeepWarm project is being implemented in 7 countries and many challenges for the district heating sector are surprisingly common for the whole Eastern European region, including overcapacity of district heating systems, reduced heat demand, dominance of fossil fuels, low efficiency and high energy cost. Climate change is strengthening many of these challenges and stress the need for modernisation actions”, Kyryl Tomliak noted during the introductory presentation.

He also highlighted that the concept of efficient district heating defined in the EU’s energy efficiency directive should be a guiding principle for future development of district heating systems in Ukrainian cities.

Maksym Zhuk, Head of Strategic Development and Implementation of Credit and Investment Projects department of Zhytomyr DHS, presented modernisation projects being developed with the support of EBRD and SECO, including construction of biomass CHP using ORC technology, modernisation of boiler houses and replacement of pipelines.

“Zytomyr DHS makes significant investment in energy efficiency and renewable energy, which will allow reducing natural gas consumption by 15 million cubic meters and electricity consumption by 23.5 GWh per year leading to significant GHGs emission reductions. COVID 19 pandemic has some impact on project implementation schedules due to reduced tax collection by local budgets and redirection of financial resources to finance medical system in the cities. However, the works are being continued and the completion of all major projects is expected in 2021”, stated Maksym Zhuk during his presentation.

“Fuel cost contributes to a major share of heat energy cost. Decrease in natural gas prices combined with high biomass prices make a significant challenge for the biomass to energy projects we are executing and planning. At the moment, we had to postpone the testing of a modernised boiler, were we switched from natural gas to biomass, due to high cost of biomass pellets required for testing. Still, the enterprise continues to implement its modernisation concept aimed at securing lower cost of heating for the residents of the city due to improved energy efficiency and demand control measures”, noted Bohdan Myskiv.

Olga Adamovska, Head of Production and Technical department of Khmelnytskyi DHS, presented the history and current operation of the company focusing on the planned modernisation projects.

“We have recently constructed a third natural gas CHP unit and cover all our electricity demand with own generation. The enterprise is also planning further modernisation projects focusing on a complex measures with the centralisation of heat supply capacities, replacement of pipelines, installation of new pumps and heat exchangers. Besides, Khmelnytskyi city is working on the development of improved waste management system and the enterprise assess the possibility of using RDF produced from municipal waste as a fuel for heat generation”, Olga Adamovska mentioned.

“Approximately one third of the DHS customers receive heat energy from a privately-owned CHP, which is connected with the distribution network via 8 km long large diameter pipeline constructed almost 50 years ago. The deterioration of the pipes leads to high energy losses and risk of heat supply interruptions. The city is seeking for financing opportunities to replace the pipeline with new pre-insulated pipes with reduce diameter to significantly improve energy efficiency and energy security of heat supply”, Iryna Divinska pointed out.

You can find the presentations from this Inspire Event on the Ukrainian country page.

The next webinar in this series will be devoted to Best practices in district heating system modernisation, green transition and climate policy and will be held on 16 July 2020. (in Ukrainian)