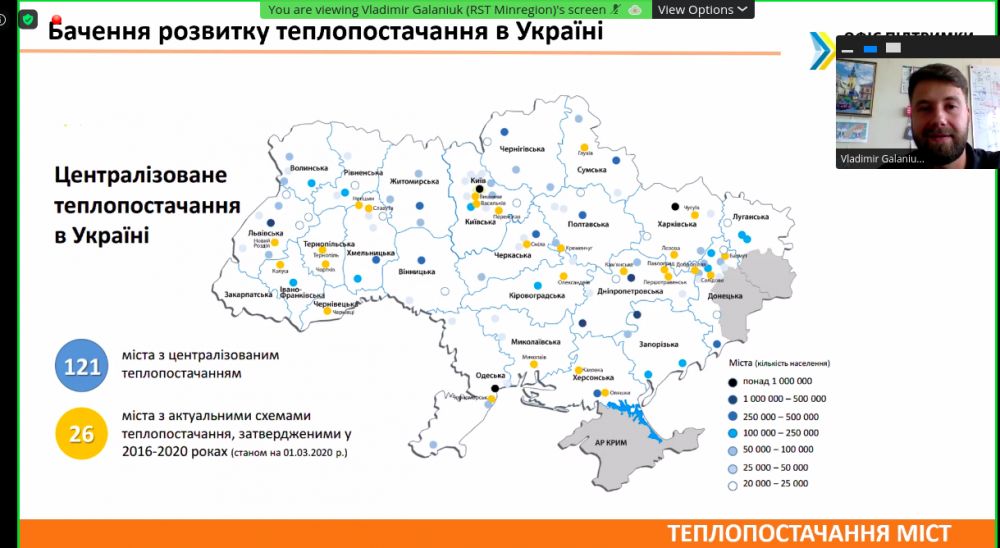 The second webinar within the Inspire Event series of KeepWarm in Ukraine was devoted to best practices in district heating and attended by 33 participants. The webinar was organised by Ukrainian KeepWarm partner KT-Energy LLC on 16 July 2020.
Kyryl Tomliak, Director of KT-Energy LLC, opened the webinar and noted that promoting best practices and energy efficient district heating is one of the primary goals of the KeepWarm project.

Volodymyr Halaniuk, Head of the Utilities Services Sector in the Reform Support Team of the Ministry of Communities and Territories Development of Ukraine, provided most recent data on the district heating sector and priorities of state policy with respect to modernisation of district heating systems.

Yuriy Shafarenko, Deputy Head of the State Energy Efficiency and Energy Saving Agency of Ukraine, presented other policy documents being developed to promote renewable energy use in district heating.

“There are some good examples of district heating companies, like DHS in Kamianets-Podilskyi, significantly increasing the share of renewable energy in their generation portfolio. Overall, 8% of heat energy was produced from renewable energy in 2018 and, taking into account more recent projects, Ukraine is on track to reach a target of 12.4% share in 2020. The draft law on the introduction of biomass trading platform and other regulatory and legislative initiatives to promote bio-methane use, which are supported by the State Energy Efficiency and Energy Saving Agency of Ukraine, will create additional incentives for biomass to energy projects in district heating sector”, concluded Yuriy Shafarenko.

“The Green Deal has been presented as an action plan for the new European Commission elected for the next 5 years, however the documents included in this policy package will define the priorities of European development in different areas for the next decades. It will also frame the EU-Ukraine cooperation within technical assistance projects, the Eastern Partnership, loan funds available via the European Investment Bank and other mechanisms. Incorporation of the main priorities of the Green Deal, such as climate change mitigation and adaptation, clean and affordable energy, as well as energy- and resource-efficiency, into our own political agenda both at national and local levels is important to attract financial support for Ukraine, including the support for district heating modernisation projects”, commented Andriy Andrusevych.

“District heating systems generate a significant amount of greenhouse gases but at the same time have large potential for carbon emission reduction due to energy efficiency improvements and switch to renewables. Both climate policies and requirements of financial institutions will push district heating operators for low carbon development in the coming years. Thus, integration of climate mitigation and adaptation measures is important for every district heating modernisation programme”, concluded Mykola Shlapak.

All the presentations from this and the first KeepWarm Inspire Event in Ukraine can be found on the Ukrainian country page.

The next webinar will be devoted to Proposals for the national action plan on district heating modernisation developed within KeepWarm project and will be held in Ukrainian on 23rd of July 2020.